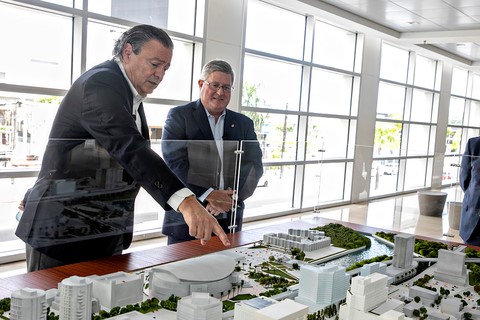 Popular announced that it is set to begin the construction of several office buildings in Hato Rey with the goal of creating a corporate campus to centralize a significant part of its operations. The new facilities will serve as a competitive tool to develop, retain, and attract the best talent and to better serve clients. The institution will invest over $300 million in the project with construction to take place until 2026.

"Our Hato Rey corporate campus will allow a greater number of Popular employees to work from our new facilities, offering an environment that fosters their well-being, and where learning, collaboration and innovation are continuously encouraged,” said Ignacio Alvarez, president and CEO of Popular, Inc.

“We are committed to Puerto Rico and its potential, and we understand that an important part of the economic recovery comes from bold projects such as this one. We expect our campus to further transform Hato Rey into a center of urban movement, offering a wide variety of amenities to our employees, customers and visitors,” Alvarez added.

Popular disclosed that the project is expected to generate nearly 1,700 jobs directly and indirectly during the construction phase. It will consist of two buildings, including one next to what is now Popular Center and movie theaters, in the area where the Fine Arts parking lot is currently located. This first building will feature 10 floors of new office space, a new Training and Development Center for employees, a food court, gardens, and parking for 500 cars, among other offerings. The building’s upper level will include a 126-room hotel.

In front of Popular Center, located in the parking lot on the north side of the restaurant, a second building will be constructed, which will include a wellness center and a gym for employees, a supermarket, food outlets, and nearly 800 parking spaces.

"After many years of planning and preparation, this project is finally a reality. We believe in the importance of a development like this, not only for Popular and the Hato Rey area, but for all of Puerto Rico. We've done it before, with projects like the Old San Juan building, which opened in 1939. It was built at a historic moment, after surviving the Great Depression and served as an example of innovation and a symbol of hope. In 1965, we repeated that feat by building Popular Center with the intent of creating what is now Puerto Rico’s financial district. Popular Campus will become part of our legacy and a reflection of what we as a people can achieve," said Richard L. Carrión, Chairman of Popular's Board of Directors.

Popular advanced the development of Hato Rey by establishing its first building in the area - Popular Center - in 1965. At that time, it was one of the tallest in the area and marked a milestone in architecture. This building was designed by the architectural firm Toro & Ferrer in collaboration with Kahn & Jacobs and was part of the projects that Don Rafael "Papi" Carrión developed while he oversaw the financial institution.

The Popular Campus design is a collaboration between the firms of Perkins Eastman, New York office, and V Architecture, based in San Juan, Puerto Rico. Both firms are recognized for the variety of large-scale and iconic projects they have completed.

The new buildings were designed with careful consideration of the environment and will be developed following the sustainability guidelines to obtain Leadership in Energy and Environmental Design (LEED) certifications from the US Green Building Council.