Webcast: Economic Impact of the COVID-19 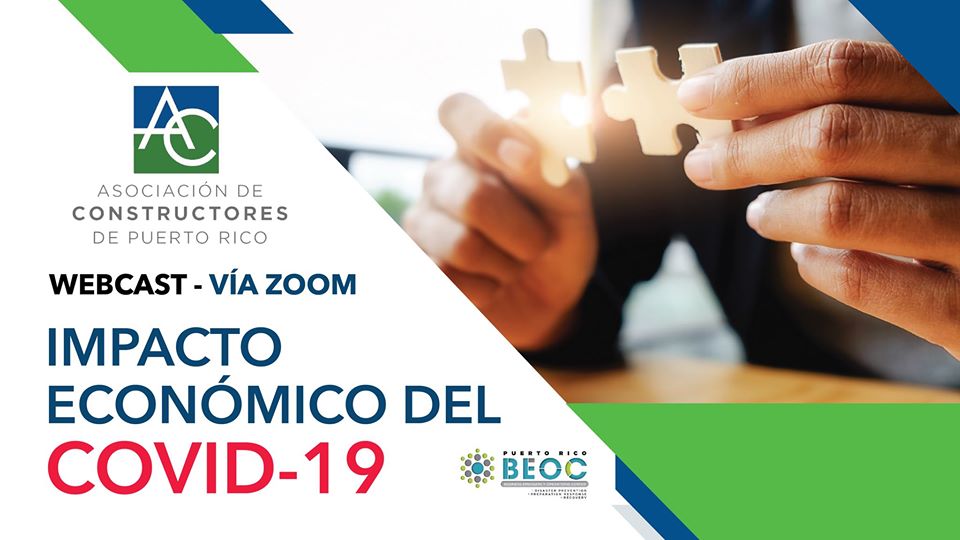 On Friday, May 1st, 2020, people joined the Economic Impact of the COVID-19 webcast hosted by the Puerto Rico Builders. Moderated by the PRBA treasurer, Waleska Rivera, this seminar focused on the evident impact of the novel virus in the local economy. On her opening remarks, Rivera stated that the PRBA understands that the government's decision to establish a lockdown, despite being difficult was the right one to make.

The chairman of the board of the PRBA introduced Resident Commissioner, Jenniffer González, who explained to the participants her efforts at the federal level and how the different federal aid packages will be distributed locally. González Colón emphasized the reach of the packages that are currently being evaluated by Congress which will be focused on infrastructure, specifically on highways, airports, and everything related to the transportation aspect. The Resident Commissioner paid special attention to the discussion of the usage of the CDBG-DR funds obligated to the Island and stated that she will follow up with the government agencies to get a detailed report on their usage, and expressed her concern on the possibility of the federal government requesting the funds back due to a lack of usage.Economist Joaquín Villamil, CEO of the Estudios Técnicos firm started his intervention stating the difference between the economic impact faced by Island due to the Coronavirus disease and the economic impact generated by the 2017 hurricanes and the recent earthquakes that have rattled the island. Villamil stated that the prolonged impact of the COVID-19 would not make possible for economists to draw a figure on its direct impact on our economy. The economist also mentioned that the impact at the social level would be very difficult to measure.In his participation, Villamil established several important topics which included:

Villamil continued his participation stating that the emergency funds allocated for the Island due to the COVID-19 would not provide the bases for sustained development and that the funds that have been received had had an impact only at the consumption level but not in the much-needed investment and development. As for the management of the economy in the future, the economist stated that it will be necessary for the non-for-profit organizations and municipalities to assume the leadership role. This will ease the burden of the central government and will facilitate the provision of essential services. The municipalities in Puerto Rico have become an extension of the partisan politics and the only thing that can change that mindset will be the integration of the non-governmental organizations to perform continuous scrutiny of the public work.As to the CBDG-DR funds, Villamil established that Puerto Rico biggest problem is at the projects execution level when it comes to the usage of the program funds.Eng. Emilio Colón- Zavala Chairman of the Puerto Rico Business Emergency Operations Center (BEOC) along with Eng. Daneris Fernández and Roberto Toledo advisors of the government-appointed body mentioned that the BEOC prepared some guidelines for the businesses to implement at the moment of reinserting themselves into the economy. Colón-Zavala made clear that the guidelines prepared by the BEOC are only recommendations for companies to prepare their plans and is not mandatory for them to implement.

On the recommendations provided by them to the Governor, Colón Zavala mentioned that with the recommendations of the medical task force, they performed a risk assessment at the health and economic level and established which industries were suitable to return to their business activity. In a way to determine in which of the reopening phases the different industries where placed, data from a study performed by the Graduate School of Public Health of the University of Puerto Rico was utilized. The aforementioned study demonstrated that the construction industry was placed as one of the sectors with the lowest level of risks of contracting the COVID-19, this due to the nature of their job.