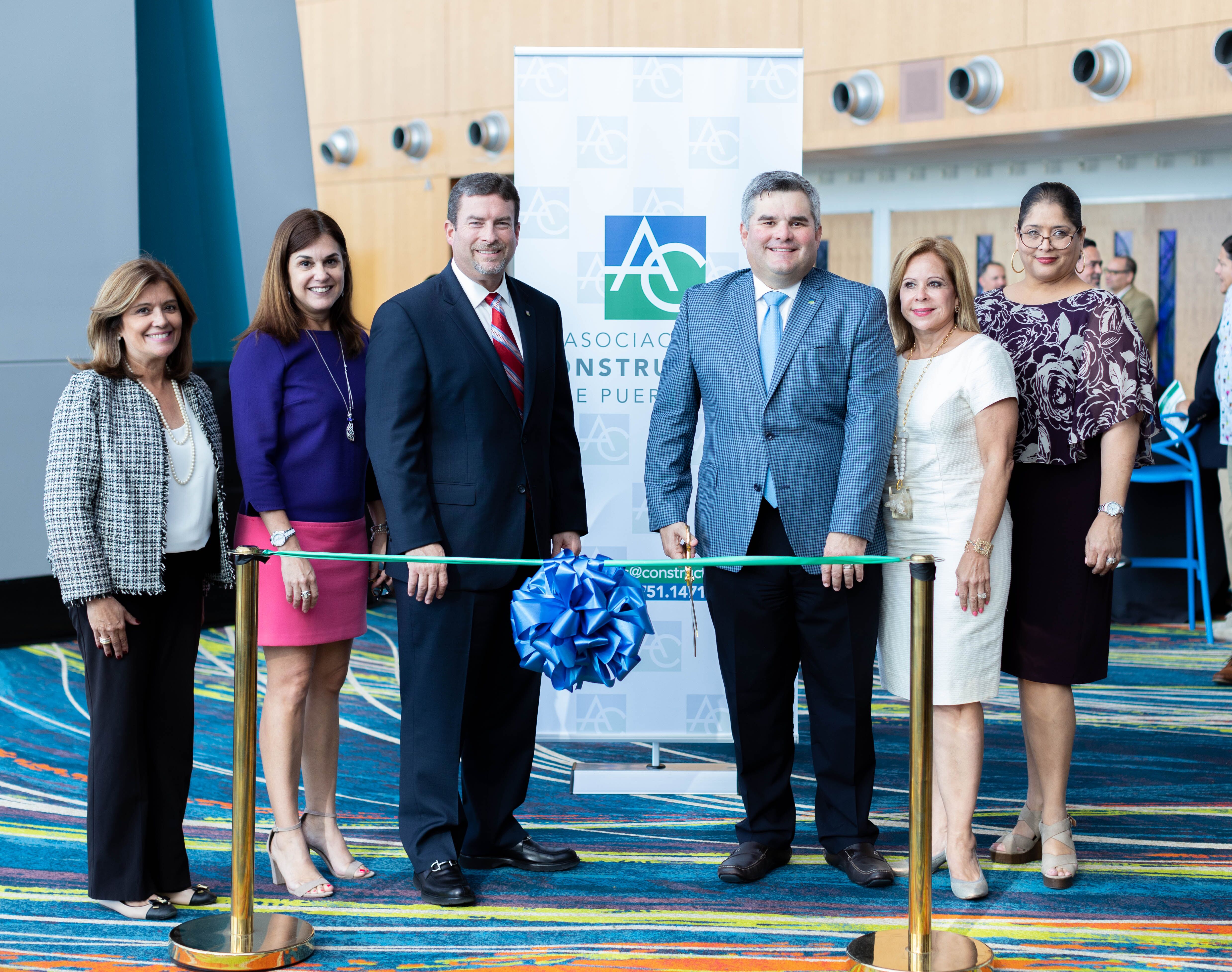 Recognizing the need to continue developing strategies that provides the tools to face a Challenge to Build the Future the Puerto Rico Builders Association (PRBA) presented a solid and relevant program on its 46th Annual Convention. The event was held on October 29 and 30 at the Puerto Rico Convention Center.The Puerto Rico Builders Association managed once again to put together a rundown which once again ratified that this is the most important Construction Industry event on the Island.The two-day event kicked off with the annual members meeting with a record in attendance and in which the new Board of Directors was elected. Alfredo Martínez-Álvarez, Jr. was elected as the new chairman of the Board. Martínez-Álvarez, Jr., two- year term will begin next January and will count with a renowned team of professionals that are willing to contribute to continue with Puerto Rico’s reconstruction process. The Board of Directors is also composed by Architect Vanessa de Mari-Monserrate who was elected vice chairman of the Board, Waleska Rivera as treasurer and Armando Vilas, esq., as secretary.The members of the new Board of Directors are: Emilio Colón Zavala, Adolfo González Santini, Orlando Méndez, Adriel Longo, Pablo Dardet, Agustín Rojo, Patricio Martínez Lorenzo, Alejandro Brito, Rafael Rojo, Christian Bernaschina, Ramón de León, Daniel Acosta, Ricardo Agudo, Federico Sánchez Ortiz, Ricardo Álavrez-Diaz, Fernando Sumaza, Roberto Trápaga Fonalledas, Francisco Arteaga, Silvio López, George Pavarini, Victoria Colón, Jorge Guerrero, Nydin Watlington, María de los Angeles Rivera, and Wilma Alejandro.The first day’s panels focused on the challenges currently faced by the construction industry, a panel of experts and opinion makers provided the attendees with the tools to understand the need to start building the Puerto Rican Home for the 21st Century. John Englander, president and founder of the International Sea Level Institute participated in the second panel, which helped to realize The Challenge of a Changing Climate: Are we up to it?Governor Wanda Vázquez- Garced opened the second day of the 46th annual convention addressing the importance of focusing the administration’s efforts to keep working towards the island’s reconstruction process and the importance to finally accessing the funds allocated for the reconstruction two years after hurricane María ravaged our island.Addressing one of the PRBA’s missions Adam Greenfader, Chairperson of the Urban Land Institute- Caribbean Council, and PRBA’s liaison at the state of Florida moderated: The Future of Tourism and Hospitality: Increasing Capacity and Competing in a New Caribbean Market, panel. A distinguished panel composed by Puerto Rico Tourism Company executive director Carla Campos, Pablo Matunara, Managing Director of Development for South America and the Caribbean at Hilton International, Rachel DeLevis, Policy Associate for AirBnB, Federico Stubbe Jr., President of PRISA Group, Federico Sánchez, President and CEO of Interlink Group and Eric Berman, Chief Investment Officer at Lifeafar International discussed the need for Puerto Rico to step up in the region as a principal competitor in the tourism market.The main event had Anthony A. Williams, former Mayor of Washington D.C., and current Chief Executive Officer of the Federal City Council as keynote speaker. Tony Williams shared with the attendees the Anacostia River Waterfront Urban Transformation Case Study. Williams also addressed the importance of the urban and social transformation of his city and its relevance for us in Puerto Rico, highlighting the importance of starting to rebuild and restore the public grounds by regaining trust, sharing responsibility and being accountable.As you all know the PRBA’s Convention hosts the annual award ceremony in which key players of the construction industry are recognized for their outstanding performance and contributions first to Puerto Rico and to our industry. This year awards recognized:

Dennis González, Kenneth Rivera, Habitat for Humanity of PR, Thomas Kierce, and Nory Rivera, PRBA Executive Director received this year’s President’s special award. Zaida Rodriguez, President Emilio Colón Zavala’s wife, received a special acknowledgement for her support to the Community Service Committee.The Puerto Rico’s Builders’ Association concluded the two-day event exploring the Housing Affordability: Issues and Opportunities and encouraging all attendees to Think Big: Building in the Times of Crisis. This panel, moderated by Waleska Rivera, included presentations by Randy Noel from the National Association of Home Builders, Friedel Stubbe PRISA Group CEO and Nydin Watlington, Cemex Public Affairs and General Counsel.The professionals gave insights on the challenges we face and how these can be overcome. “We cannot be afraid, we have to believe in ourselves. We have the potential, we have projects that are recognized internationally, we just can’t be afraid,” said Stubbe when speaking on how Puerto Rico has the opportunity to become a reconstruction hub of the greatest caliber.Both lecture-filled days were concluded with happy-hour networking cocktails where guests enjoyed delicious appetizers and a full-service cocktail bar.The PRBA would like to thank all of the sponsors who made this event possible and all those assisted this year’s Convention. See you next year![caption id="attachment_2724" align="alignnone" width="300"]

On the first day members held their Annual Members Meeting. Guests were able to enjoy numerous panels as a delicious lunch in the PRBA 2019 Awards Luncheon.[/caption]

Exhibitors where able to showcase their latest innovative products to attendees, builders, architects, bankers, lawyers, and all conglomerates within the construction sector.[/caption]

Yanira Otero and José Santiago from Steel and Pipes present their materials next to their character Hierroton.[/caption][caption id="attachment_2738" align="alignnone" width="300"]

Gregg Morris, Patricio Martínez Lorenzo, Esq., John Englander and Fernando Pagés, from the panel "The Challenge of a Changing Climate: Are We Up To It?"[/caption][caption id="attachment_2733" align="alignnone" width="300"]

Zaida Rodríguez received the Presidential Award for her work as member of the PRBA's Community Service Committee.[/caption][caption id="attachment_2781" align="alignnone" width="268"]

Joe Vizcarrondo received an award in the name of Caguas Ambulatory Center: Institutional Project of the Year.[/caption][caption id="attachment_2782" align="alignnone" width="265"]

Rachel Fernández, from Banco Popular, received an award as Banker of the Year.[/caption][caption id="attachment_2783" align="alignnone" width="266"]

Fernando Gil, Esq., Secretary of Housing of Puerto Rico, was awarded as Government Official of the Year.[/caption][caption id="attachment_2785" align="alignnone" width="258"]

Francisco Arteaga, among the CPM team, was awarded as Associate Member of the Year.[/caption][caption id="attachment_2787" align="alignnone" width="269"]

Oceanographer John Englander, one of the main speakers at the Convention.[/caption][caption id="attachment_2788" align="alignnone" width="277"]